Today is World Pneumonia Day – a day set aside by the global public health community, to enlighten the public and policy makers about the negative health impact of pneumonia. As the world marks this day, ARFH reflects on the efforts of the Government of Nigeria and its development partners to save the lives of thousands of Nigerian Children who die from pneumonia every year.

Globally, pneumonia is the top infectious killer of children under five years of age, killing nearly one million children annually. In Nigeria, it is the second leading cause of under-five deaths (after malaria), claiming the lives of about 121,000 Nigerian children every year (UNICEF, 2014). Pneumonia is preventable and treatable and cannot be allowed to continue to kill our children.

The global theme for this day “Universal Access for Pneumonia Prevention and Care” is apt and timely. ARFH is proud to be making significant contribution to the national efforts to take pneumonia treatment services to the communities through the Integrated Community Case Management (iCCM) of common childhood illnesses. With the support of the European Union and UNICEF, ARFH is currently engaging communities in Adamawa and Kebbi States as part of the roll-out activities of the iCCM Project. By June 2015, we would have built the capacity of at least 4,000 Volunteer Health Workers in hard-to-reach communities and 460 ward-based supervisors on proper diagnosis and treatment of pneumonia, malaria and diarrhoea in both states. This intervention will no doubt save several thousands of lives of children in Adamawa and Kebbi States.

ARFH is excited about the planned introduction of the Pneumococcal Conjugate Vaccine (PCV) into the routine immunization system in twelve states by December 2014. It is our belief that this will be scaled up to all states of the country in the nearest future. We hereby call on government at all levels to demonstrate strong political will to saving the Nigerian children from pneumonia and other common childhood killer diseases. As an organization, we shall continue to work with government and other partners to achieve universal access to prevention and treatment of pneumonia in all parts of Nigeria.

The Violence Against Persons Prohibition (VAPP) Bill 2011is a proposed legislation which defines violence, seeks to eliminate violence in private and public life, prohibits all forms of violence, sexual, psychological, domestic, Harmful traditional practices (HTP), discrimination against persons and provides all round protection and effective remedies for victims as well as punishment of offenders. It was passed by the House of Representatives in March 2013. It passed through 2nd Reading unanimously on October 16, 2014.

It seeks to eliminate or reduce to a minimum the occurrence of gender based violence in the Nigerian society especially in homes, public spaces or even in conflict situations. It therefore protects the Right of Nigerians against violence especially violence against women. It aims at addressing the gaps in current laws on violence in private and public spaces. Specifically, it is aimed at responding to old and emerging forms of violence; in particular gender based violence.

3. What are the Legal and Social implications of the Bill?

it criminalizes violence against ALL persons, providing matching penalties for offenses in order to halt the high level of impunity of offenders in private spaces, especially domestic violence in all its ramifications. It also creates a support system for victims of violence to minimize pains and enhance recovery.

You too can also support the bill by doing the following;

Lend your voice in support of a quick passage of #VAPPbill!

Hajara Sule is a trained Role Model Caregiver (RMC) living and working in Shatta Community in Bosso Local Government Area (LGA) of Niger State in Northern Nigeria. She is one of the heroes of the RMC initiative of the Association for Reproductive and Family Health (ARFH), where community volunteers are trained in prompt Community Case Management (CCM) of Malaria for vulnerable groups. ARFH is a Sub Recipient to the National Malaria Elimination Program (NMEP) on the Global Fund (GF) Round 8 Phase 2 Malaria Project.    Hajara, like other RMCs, provides services around her home and community and serves as a liaison between her community and the primary health facility (PHC) to which she is attached. She provides prompt treatment and care for children under-five years with fever and has provided services to over 300 children in her community. She refers adults, especially pregnant women to health facilities to receive appropriate Ante Natal Care (ANC) services and engages in community mobilization and sensitization on malaria prevention activities. She is one of the 525 RMCs trained by ARFH across the 25 LGAs of Niger State who have achieved the mandate of bringing care to vulnerable groups as close to the home as possible.

Each month, Hajara visits the local PHC to get anti-malarial medicine. She is able to provide proper account of medicines and treatments; her husband who is more educated supports her with documentation. She feels highly motivated by the support of her husband and her community. “My husband has been very helpful, he even helps with house chores whenever I am busy with my clients”, she says. Many women in Shatta come to Hajara for other health related issue and she promptly refers them to the Primary Health Centre. ARFH collaborates with local CSOs to provide supportive supervision to Hajara Sule and other RMCs in the community in Niger State. 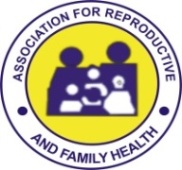 She has shown an exceptional level of commitment to Malaria prevention interventions which include improving the use of Long Lasting Insecticidal Treated Nets (LLIN) by encouraging mothers to hang their LLIN at night thus reducing cases of malaria in the community. She educates women on practical ways of reducing breeding sites for malaria in the environment. In her words “I visit homes, ensure their LLIN is properly hanged, encourage pregnant women to visit facility and also educate women especially on keeping their environment clean”. This according to her has helped in the reduction of malaria and increased uptake of ANC services in her community amongst pregnant women. In the words of the community leader, Hajara’s activities have helped to educate community members on early identification of symptoms associated with Malaria, increased prompt access to treatment and overall reduced Malaria related deaths particularly amongst children. She also helps in mobilizing women groups to participate at the quarterly community coordination meetings where health and other issues are discussed. She plays a major role in developing the content for the community coordination meetings drama presentation by organizing and directing role plays on Malaria Prevention to educate members of the community.

Hajara is proud of her role and achievements, in her own words, ‘I am happy and privileged because many women look up to me in this community’. As a Role Model Caregiver, she is readily accessible even at odd hours when the local PHC is closed for the day. Hajara hopes to inspire other women to become change agents and active promoters of positive health seeking behaviours. She is one of ARFH’s community heroes, whom though receive only a stipend for transportation, is passionate and making a great difference in her community.

Hajara attending to a client in her community.

Founded in 1989, the Association for Reproductive and Family Health (ARFH) is a leading indigenous non-profit organisation in Nigeria committed improving the quality of life of underserved and vulnerable communities by promoting access to quality health care and harnessing community capacities for sustainable development. ARFH is a Sub-recipient to the National Malaria Elimination Program (NMEP) on the Global Fund Malaria grant and supports (in Phase 2) Adamawa, Bayelsa, Niger, Osun and Oyo States.